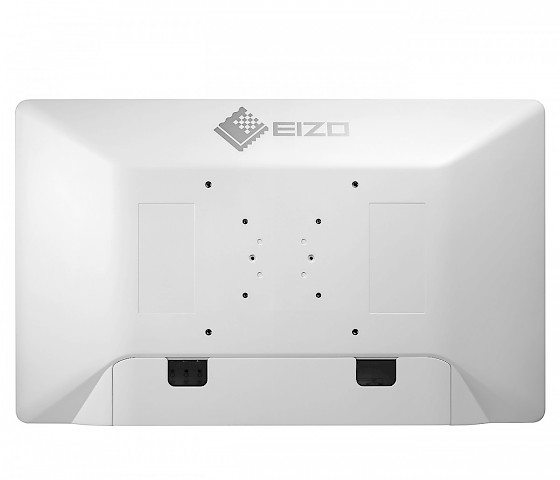 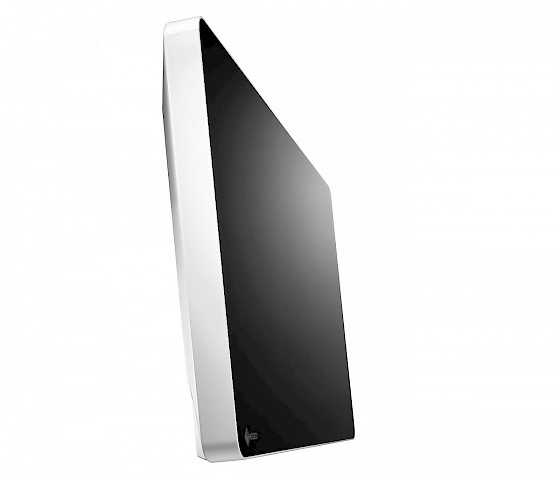 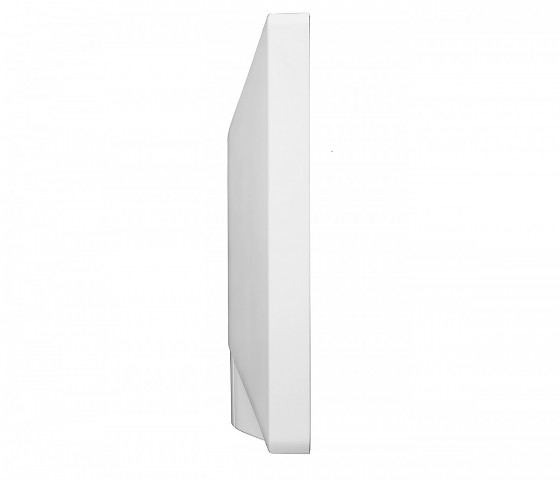 This monitor uses a 3D LCD panel with an LED backlight, a brightness of 650 cd/m² and a contrast ratio of 1400:1. It displays in full HD resolution, and faithfully reproduces 3D surgical images for endoscopy and operation microscope feeds; creating a feeling of depth where stereoscopic imagery is required. Comfortably View from Any Angle

It has a viewing angle of 178 degrees so images can be viewed from various directions with minimal changes in contrast.

Operating rooms contain various medical devices that are arranged by the type of surgery being undertaken. In consideration of safety, EIZO's surgical monitors adopt rounded corners. The front is covered with a fully flat protective glass that is dustproof and waterproof (Monitor front: IP45, overall: IP32). Cable Cover for Safety and Hygiene

As it is fanless, there is no fan vent; making it easy to clean and disinfect. Cables can be neatly stored in the cable cover, improving safety and hygiene in the operating room.

Reflections on the screen of LCD monitors are caused when external light hits the screen and reflects off of the glass and air layer at different refractive indices. Optical bonding technology minimizes the refractive index by bonding the LCD display with the external protective glass; removing the air pocket between, and reducing eye fatigue caused by screen reflections.

When using a monitor in an environment where the temperature can fluctuate severely, condensation may appear in the air pocket between the LCD panel and protective glass. Using optical bonding, there is no air pocket, meaning that condensation does not form and visibility is not compromised.

The CuratOR EX3220-3D uses a polarized system for displaying 3D images with excellent color characteristics and without flicker. The supplied 3D polarizing glasses required to view images in 3D do not require batteries for operation and are lightweight. This makes them perfect for long surgeries where heavy, battery operated glasses may fail and become uncomfortable. Furthermore, the glasses have an anti-fog coating to prevent fog and maintain clear vision even when wearing a surgical mask.

The monitor support Side by Side, Line by Line, Top/Bottom, and SIMUL 3D signal formats. Regardless of the orientation of the endoscopic camera, you can display the image in a direction that is easy to see. With the parallax adjustment function, you can adjust 3D images both vertically and horizontally so that it displays a natural sense of depth. Two separate signal sources can be viewed simultaneously on the one monitor screen side by side. 2D-mode: Adjust Screens Independently from Each Other

When displaying two signal sources side by side on the same screen, each image can be adjusted without interfering with the other screen. This is perfect for multi-modality use. Regardless of the orientation of the surgical camera, you can rotate or mirror the screen by 180 degrees to find the perfect operating view. The monitor supports various video input/output signals for connecting to various types of modality equipment. Furthermore GPI and RS-232C allows you to externally control 3D/2D display switching, input signals and screen rotation, so that you can change the display in conjunction with the settings of the surgical equipment being used.

The monitor is designed to dispel heat without the use of cooling fans. This creates a quiet, reliable monitor that doesn't interfere with the air flow in the operating room.

The monitor supports VESA mounting standards so that it can be installed in various locations such as from ceiling arms and wall hangings. In order to realize safe and reliable monitors that can be used with confidence at any medical institution, EIZO acquires various medical standards and safety/EMC standards. This monitor complies with the latest standard IEC 60601-1-2 4th edition.
The Advantages of Using Polarized 3D Technology for Surgeries
Stereoscopic or 3D film has existed since the early 1900s, however we’re most familiar with its rise to fame in the early 2000s due to its widespread use in movie theatres. Recently, 3D technology has made its way into the medical field, from da Vinci robotic surgery to 3D endoscopy. With the advantages that 3D surgery brings, we’re likely to see much growth in this area.

Humans are quite good at detecting depth on 2D images. We use a variety of ‘techniques’ to sense depth, be it from relative sizes of objects, motion, textures, lighting and/or focus. When watching a movie, even though it’s in 2D you still know exactly where everything is in relation to each other. But as you probably find when you try walking around with one eye closed, your depth perception, although enough to survive with, is not very accurate. You may find that you misjudge the height of a staircase and trip a little, or you try to catch a ball only to realize you missed it by a few centimeters. Humans can judge depth in 2D, but they cannot judge depth accurately. And that is why 3D technology is useful in surgeries where accuracy is vital. Stereoscopic surgery seems to be preferred by many doctors, as it allows a sense of depth that cannot be felt with 2D images. This is important in surgery, as injuries may occur to the patient if instruments are not placed in precisely the right position. In order to perceive images in 3D, display systems must mimic the way our own eyes perceive 3D. If you hold your hand in front of your face and close your left eye, you’ll notice that your hand will appear to the left of your vision. And if you close your right eye, it will appear to the right hand side of your vision. Yet when both eyes are open, our hand appears directly in the middle of your vision. Our brains receive two different images, one through each eye, and process the images into one 3D image. In doing so, our brain is able to sense the depth of objects in front of us. We can mimic this by recording images from two cameras that are next to each other. A display device then ensures that one image is only visible to the left eye, while the other image is visible only to the right. In this way, our brains are able to give us a stereoscopic sense of depth. There are several ways of creating 3D images on monitors and TVs. These days the most common way is to use either polarized 3D – which is commonly found in movie theatres - or active shutter 3D – which is commonly found in TVs. For surgeries, polarized 3D is the preferred technology. But why? To answer that, you need to understand how each technology works.

Polarized 3D technology displays images on a single screen, but uses a polarizer on both the monitor and the glasses, to create two different images for each eye. This is the technology adopted by our own CuratOR EX3220-3D and EX2620-3D surgical monitors. It has many advantages and is cost effective. The active shutter 3D technique creates 3D images by quickly switching between the left and right camera feeds while blocking the left lens when the right image is shown, and blocking the right lens when the left image is shown. For each video frame, the monitor quickly changes from the left to the right camera feed. This means that for example, if a monitor typically displays one frame every second, a 3D monitor will have to display two frames every second – first the left frame and then the right frame. In order to separate these frames so that your left eye only sees the left image and vice versa, the glasses blacken the opposite lens in time with the switching on-screen. They do this by applying electricity to the liquid crystal lens of the glasses, which causes them to become opaque. As the left image displays on screen, the right lens blackens, and as the right image displays on screen, the left lens blackens.

Why Polarized 3D Is Used in Surgery

The biggest reason that polarized 3D is preferred in surgeries is due to its safety and reliability. Because the polarization process does not require electricity, the glasses worn by the doctor do not require batteries like active shutter technology. This is vital in potentially long surgeries as batteries may fail halfway through, proving detrimental to the patient. Furthermore active shutter glasses often have ‘crosstalk’ where the synchronization of the display and the glasses becomes skewed, and the left image may leak into the right lens and vice versa. As polarized 3D glasses are static and do not require electricity, there is no possibility of the image becoming skewed – making polarized 3D more reliable. Furthermore, the lack of electrical components in polarized 3D displays makes production cheaper. Another advantage of polarized 3D is that there is no risk of flicker. Due to the rapid switching of images in active shutter technology, users often notice flicker which can cause headaches and discomfort. Polarized 3D technology does not carry this risk. Furthermore polarized 3D allows for brighter images than active shutter. However in order to create 3D images, some small disadvantages arise when compared to 2D. Polarized 3D technology displays images that are not whole, but rather divided into strips, which reduces the image quality compared to a 2D image. And active shutter can only show each frame for half the intended time that a 2D video would display. The other disadvantage is that many users find that they feel nauseous or gain a headache after prolonged use, due to the misalignment of the camera. Products like the CuratOR EX3220-3D have measures against this – and allow you to adjust the parallax of images to suit your eyes. Ultimately the advantages of 3D technology – especially polarized 3D technology – outweigh the disadvantages, allowing doctors to safely see surgical images with a sense of depth. The advantages and disadvantages are summarized below. 3D Technology is entering the medical market in leaps and bounds, and is preferred by many doctors due to the increased depth perception. It is still a growing technology, likely with many improvements to come. Polarized 3D technology is preferred in surgeries as it is safer and more reliable than active shutter, has brighter images and is cheaper to produce. EIZO’s recently released 3D surgical monitors use the circular polarization technique to produce clean and crisp images for surgeries.